Overview
The anterior cruciate ligament, commonly called the ACL, is a thick, elastic band of tissue that runs from the bottom of the femur to the top of the tibia. It helps stabilize the knee joint. The ACL can become stretched or torn when the knee is twisted or hyperextended. For reasons that are not fully understood, ACL injuries are much more common in women than in men. 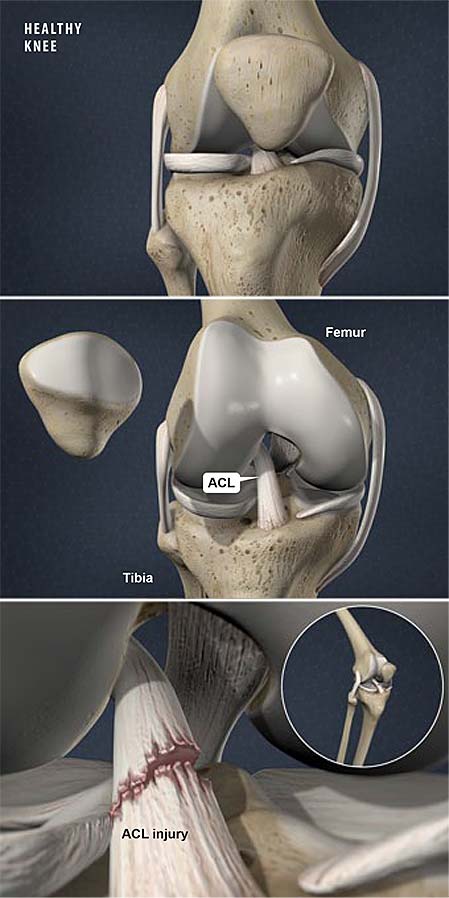 Anatomy
The anatomy of women’s hips and legs may make women more prone to ACL injuries. Men’s knees generally align directly under their hips. Women have wider hips than men, and this increases the angle at which women’s femurs meet their tibias at the knee joints. This increased angle may place a greater amount of stress on the ACL during certain movements.

Joints and Muscles
Other differences in anatomy may also play a role. Women’s joints tend to be more flexible than men’s. Women’s muscles tend to be weaker. The space around the ACL is narrower in women than in men. All of these anatomical differences can put women at a greater risk for ACL injury.

Movement
Differences in the way men and women move their bodies may also be a factor. Men tend to begin participating in vigorous athletic sports at a very young age, while women tend to start at a later age. This can allow men more time to condition their bodies to the stresses of jumping, cutting and pivoting.

Prevention
While doctors are still studying the factors that play a role in women’s ACL injuries, studies have shown that female athletes can lower their risk of these injuries by strengthening the muscles of the legs and by learning proper techniques for running and jumping.