EMAIL and/or TEXT a link to this page

Overview
This condition is a thickening of the fascia on the palm of the hand. The fascia is a connective tissue located just beneath the skin of the palm and fingers. This thickened fascia can form lumps or nodules under the skin, or long thick cords of tissue that extend from the palm to the fingers. Often, this thickened tissue contracts. This causes one or more fingers to curl toward the palm. This is called a flexion contracture. 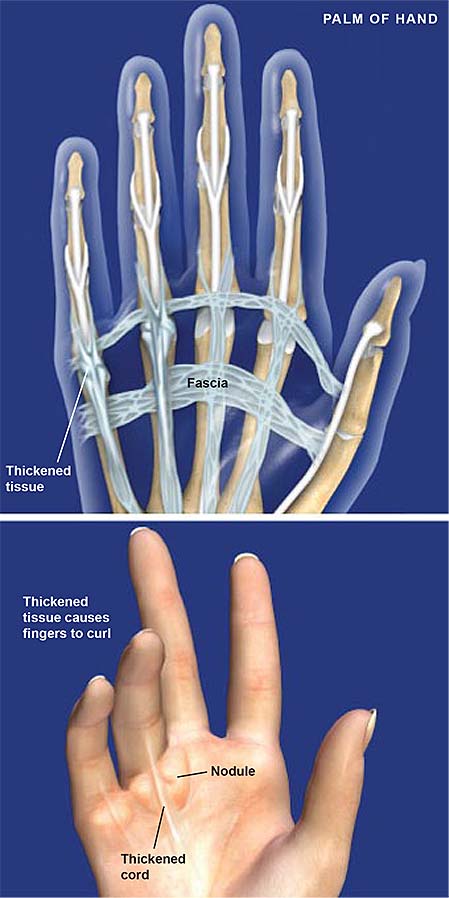 Causes
The exact cause of Dupuytren’s disease is unknown. It most commonly affects white males of Northern European and Scandinavian descent over the age of 60. It is more prevalent in patients with diabetes. Smoking, lung disease, alcoholism, and use of anticonvulsant medication have been associated with Dupuytren’s disease, but the relationship is unclear. Trauma to the hand may also play a role in its development.

Symptoms
The first symptom is a painless, firm nodule under the skin of the palm, most commonly in line with the ring or little fingers. As the disease progresses, the normal fascial bands may further thicken. They may form a cord that extends to one or more fingers. As the cord contracts, affected fingers begin to curl. They may not be able to be fully straightened.

Treatment
There is no treatment to cure or prevent Dupuytren’s disease or its progression, but treatment may be used to relieve severe finger contracture. Treatment options include surgical excision of the thickened fascial tissue or an in-office needle release of the contracture. It can also be treated with an injection of an enzyme called collagenase. This enzyme weakens the contracted cord and allows it to be pulled and broken.